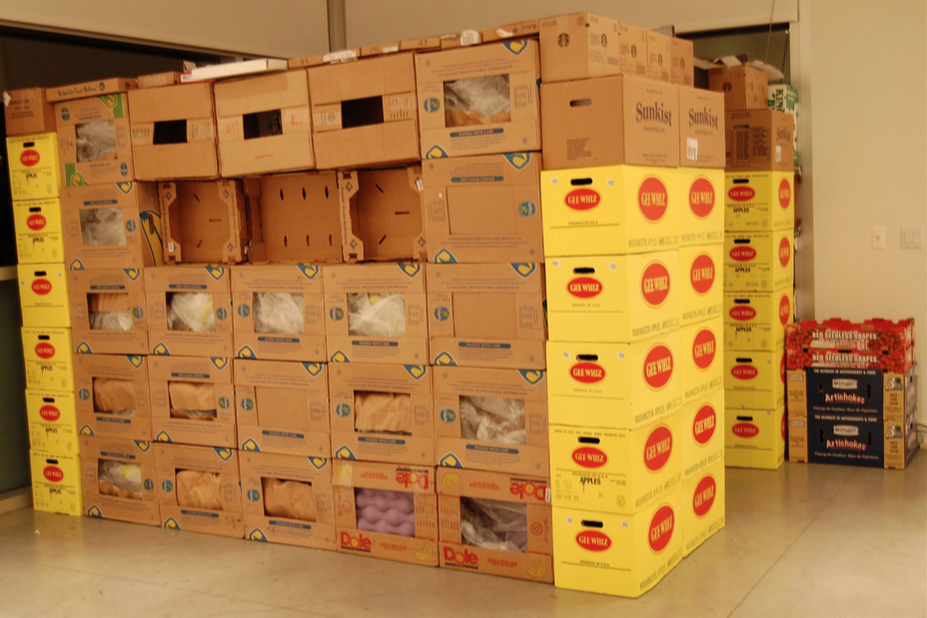 ​Medium: cardboard boxes and other found material, wheat paste, photo sensors, electronics, binaurally recorded sound, and sun light
Year: 2012, Pence Gallery, Davis, CA
​​
Gee Whiz! is a room-size camera obscura into which an audience can walk. The walls are primarily made out of cardboard boxes previously used to transport produce from farms to stores. Photo sensors are embedded into the walls to trigger pre-recorded sounds. Light from the street outside of the gallery passes through the pinhole aperture and projects an inverted image on all sides of the interior space. In this way, street activities outside of the gallery become moving images inside the camera obscura. These moving images trigger the embedded sensors to play binaurally recorded sound clips that capture everyday sounds of consumption, such as dishwashing, cooking, driving, eating, etc. Historically, cameras have been used to capture a moment in time. This installation encapsulates the images and sounds of everyday human activity as the present-day situation in which we consume.
​
Sample Binaural Recordings Below:
Please note, binaural recordings are best experienced using earphones, computer speakers can not accurately simulate the effect.
Copyright © 2019. Jiayi Young Studio. All rights reserved.